Greg Gutfeld: How to go to college (again)

Prev
All News
Next

I admit: I wasted most of my college years. I learned nearly nothing, other than how to throw up through my nose (it really is an art form).

If anything, I unlearned: most of what I had learned before, in sunny San Mateo, was replaced with stuff that later had no bearing in the real world.

In high school, I was an odd, funny writer. I co-edited the school paper, and if you looked at the crap I wrote back then in the early 80’s – it’s pretty similar to the crud I generate now.

But becoming an English major at Berkeley destroyed that. I was instructed on how to write in a specific way that sapped me of all creativity. If you’ve ever had to write “a paper,” you know what I mean. It was nothing more than a rudimentary exercise to prove that you read the book, or went to the lecture, or at the very least, stole someone’s notes who did one of the two.

There were exceptions, though – my philosophy class from Richard Wollheim on something called phenomenology, a class on Slavic lit that introduced me to Gogol, a fiction class I remember being more grueling than expected (the other students hated me), and a class I took on genetics that hurt my head.

Other than that, I learned nothing.

But now, I’m learning everything, like a freaking madman.

I’m going back to college… maybe call it night school, because I’m doing it in bed, right before I fall asleep. Everything I ever wanted to learn, I’m learning now – and it’s free (well, unless I choose to pay).

I’m finding it all on YouTube, podcasts, basically on the web, in general. Who needs school, when you have the world’s greatest professors from Jordan Peterson, to Gad Saad to Bret Weinstein, at your fingertips? Whether I’m boning up on artificial intelligence, the science of meditation or the debate over free will – I’m getting it from the source – no tuition, no travel, no dorm room needed. 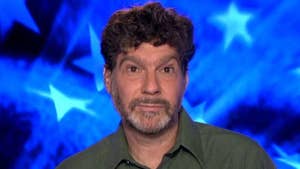 Prof: ‘I don’t know how I can go back’ to Evergreen

Weinstein was purged from his job, but later got the last laugh in the shape of a hefty half-million dollar settlement, and also a wider, more valuable moral vindication, as he made the rounds on various shows and podcasts talking about his ordeal.

Anyway, during the Evergreen controversy, he stood his ground, endured threats – but like a fur ball in a cat’s throat, was ejected from the college experience, mainly due to the pitiable cowardice of administrators. No more would Weinstein stand in front of a hundred pair of undergraduate eyes discussing natural selection. He would have to do that somewhere else.

In front of, well, millions.

That somewhere else is the internet – on podcasts like the one hosted by Joe Rogan. (Brett’s equally smart brother, Eric, also makes the pod-rounds – an astounding mathematician/economist who works for Peter Thiel. Look him up. The Weinstein brothers are sadists in the application of mind bending wisdom.)

And so now I find Brett – on Rogan’s podcast for the second time, attempting to explain to Joe his concept of “Game B.” The gist: Brett believes that the world is in an unstable situation and Earth is in danger. He cites the addictiveness of Facebook, our dependence on smartphones – and how markets accentuate their predatory aspects.

“Game A,” is the typical traditional way of doing things – which isn’t working anymore. And it’s because the evolutionary survival mechanism always encourages an amoral race for victory that ignores the permanent costs to the species. Example: If Facebook is only about likes, then who cares about any other variable? Your death could get the most likes of all!

Professor Bret posits a solution he calls Game B, which really is another way of saying “injecting something new into something old to save the world from ruin.”  If you see Game A as a bad diet, Game B is adding avocados to push out the sugar.

In short: to better Game A, inject Game B. An example Bret raises: bitcoin, which is gaining ground against our current currency.

This forced me to think of other Game B examples. I couldn’t come up with much else – until I saw it right in front of me, listening to this podcast.

Here was a professor – Weinstein – ejected from professor-land, sitting before an MMA freak/comedian (Rogan) talking for three hours about life.

I think this was Game B.

Watching this podcast in bed, on my laptop, I noticed that Rogan wasn’t getting it. But he was slow on the uptake for good reason. Weinstein was talking about him, Rogan. Weinstein had been chucked from campus (Game A) into the lap of a popular podcast (Game B). What the former Evergreen professor was talking about – either accidentally or on purpose – was the first real competition against the monopoly of academia – this new modern campus of the internet is the podcast.

I can say, accurately, that I have learned more about the world in the past year than I did in four years at Berkeley. Here, through a combination of podcasts, YouTube, and Wikipedia. I do not think I am alone in this assertion.

I’ve pretty much enrolled in an unfettered campus, where I find my favorite deans, and the deans pick their visiting professors.

In the past two years I’ve curated my own major (let’s call it modern philosophy, artificial intelligence and robots). The “professors” I’ve selected are the kind you’d sign up for the moment you saw them listed: from Robert Wright, Gad Saad, Scott Adams, Sam Harris. Among the four alone, I cultivate a garden of knowledge, and make up for lost time. I rely on the deans – people like Joe Rogan and Dave Rubin – who select interesting people who teach the class you want. And you can choose any class you want – if you want to learn about drugs, artificial intelligence, social justice zealotry, or tribalism – any one of these experts in interest will steer you there.

As YouTube has made all facts free, it has made the campus less powerful. I can get up to speed on anything, and I can dig as deep as I want.

This explains Rogan’s confusion when faced with Weinstein’s suggestion: Rogan can’t see Game B, because he is part of Game B. If Game A is education, Game B is the podcast.

Such shows are the solution to the monolithic campus that dictates uniform thought and acceptable speech.

I predict that in five years the campuses will be mere museums, shopping malls for jerseys and jackets – or concert venues for Maroon 5 reunion tours.

The real learning will be at home, with –  as Scott Adams would say, “your favorite beverage” – as you learn more about the world than you ever would have sitting in a cold hard desk, lectured by tenured ideologues, scolded by peers who demand obedience. It will be you or me, waiting for Dave Rubin’s next uninterrupted chat with someone I might not have heard before – or had heard of – but not without heckling.

And these modern deans and their chosen professors would hit millions of students. I look at the numbers on the Rogan/Weinstein podcast and it’s over 800k views … has any professor ever taught 800,000 people? At once? Before this?

This is just a beginning. The campus will be reborn as something new and fresh, as deans arrange live events, in which people who really want to be there, will be there.

And those who wish to silence you, or tell you what to think, will fade away like so many technologies we’ve since abandoned. College will become the VHS of learning – discarded because it just was just too expensive, too bulky, too slow, and simply couldn’t keep up.

Greg Gutfeld currently serves as host of FOX News Channel’s (FNC) The Greg Gutfeld Show (Saturdays 10-11PM/ET) and co-host of The Five (weekdays 5-6PM/ET). He joined the network in 2007 as a contributor. Click here for more information on Greg Gutfeld.